Fast as hell, dynamic as hell, extreme as hell.

The 2020 BMW M8 Gran Coupe Competition is a very elegant vehicle with a less-than-elegant name. Sitting at the top of the BMW 8 Series range, the M8 boasts an insane 625-horsepower, twin-turbocharged V8 and a track-focused suspension. But the Gran Coupe has twice as many doors, an extra 7.9 inches between the wheels, and a body that’s 9.0 inches longer overall. Pair all that with a pleasant, four-seat cabin and the M8 Gran Coupe is surely the king of the 8 Series line.

Power and agility are great, but the M8 GC is extremely attractive, too. We’d even go so far as to call it the most beautiful BMW at the moment (although some might argue the bar is pretty low for “most beautiful BMW” at the moment). But it’s the combination of style, speed, and handling that will allow the M8 GC to compete with a loaded batch of rivals. The Porsche Panamera Turbo, Mercedes-AMG GT63 S, and the outstanding Audi RS 7 are worthy rivals, offering comparable performance in the same very large, very heavy, and very expensive body style.

BMW M8 Gran Coupe: A Fire-Breathing Four-Door With Up To 617 HP

Does it drive as well as the M8 Coupe?

The M8 Coupe was one of the most sensational cars we’ve driven in the past year, so we expect a lot of the mechanically similar M8 Gran Coupe. That means a twin-turbocharged 4.4-liter V8 with 617 hp and 553 pound-feet of torque. Power goes to all four wheels via M’s reinforced version of ZF’s eight-speed automatic transmission. An electronically controlled limited-slip differential distributes power laterally at the back end as needed.

But the sophisticated M xDrive all-wheel-drive system is also adjustable, and can force much more of the power to the rear at the touch of the button. In fact, with the stability control set to off, drivers can decouple the front axle entirely, if you really want to put your $143,000 sedan at risk.

That said, driving dynamics lag a bit behind the coupe – at least on paper, thanks to the larger body, longer wheelbase, and a 209-pound weight increase.

Save Thousands On A New BMW 8 Series

So once again: Can you see the differences?

We were originally thinking that the M8 Coupe would be a bit wilder, but chassis developer J?rg Weidinger told Motor1.com that the Gran Coupe’s basic setup is closer to the two-door hardtop than the M8 Cabrio. Your author has only driven the M8 Coupe on a racetrack, while this Gran Coupe test was on normal country roads – this gives a slightly distorted picture.

But the gist is that even the biggest M8 is an absurdly agile and sharply focused sedan. Compared to the six-cylinder 840i Gran Coupe, which impressed us with its light-footedness, this one is on a completely different level.

But the quintessence is: Even the big M8 is an absurdly agile and sharply focused dog. Compared to the six-cylinder 840i Gran Coupé, which we liked very much with its light-footedness, the M8 is on a completely different performance plane. The suspension is firm – it’s not too disturbing, but don’t expect a flying carpet either. We’d suggest simply setting the dampers to Comfort and only using Sport Plus if you’re driving someone you don’t particularly like.

All the stiffening and changes in suspension geometry, including more camber on the front wheels, results in an unusually direct front-axle connection very fast steering responses. As has been the case with most M products, the M8’s ability to change directions is almost comically sudden. The thick-rimmed steering wheel is a joy even when the M8 is in its normal setting, although the rack can be a bit numb and artificial. If you switch to Sport mode, the steering weights up, but it doesn’t become much more communicative.

As with the M8 Coupe, the four-wheel drive is truly outstanding, offering heroic amounts of traction while giving the sensation you’re driving a playful, rear-drive vehicle. That’s doubly true when you switch from 4WD to 4WD Sport, which is the best of both worlds.

Experienced (or very brave) drivers can even click into 2WD mode for a full helping of madness as the 625-hp V8 does its best to destroy the two Michelin Pilot Sport 4S tires at the back. As a pure rear-drive vehicle, the M8 delights with its ability to shred rubber.

There’s little here we haven’t said elsewhere: the more you push this beastly eight-cylinder engine, the less you can resist it. The throttle response is astounding time and time again, and the torque across the rev range is simply perverse.

A vehicle that measures almost 16.5 feet long and weighing nearly 4,500 pounds shouldn’t be able to hit 124 mph in 11 seconds. It creates funny (and slightly painful) feelings. There is now a type of large, ultra-performance sedans so fast that you can hardly call up more than a quarter of the power in everyday life, unless you want to become closely acquainted with the local constabulary.

Overwhelming is probably the right word for the performance of this car. But the M8 GC’s powertrain also includes an outstanding eight-speed automatic that leaves nothing to be desired, either when set to automatic or in manual mode.

The sound of the twin-turbo 4.4-liter is sublime, but not as deep and thunderous as the cars from AMG. Rather, this is an eight-cylinder baritone with a grand, but unobtrusive presence.

The cabin doesn’t really differ from that of the other M8s, except that there’s a little more headroom at the front. The quality of the workmanship, materials, and overall design are beyond reproach. If you’re an extroverted sort, you might want to opt for our test car’s Sakhir Orange Merino leather.

The superb head-up display is standard on the M8 Competition, so you don’t have to rely so much on the cumbersome, but readable digital instrument cluster. There is also some criticism of the seats, which for a large GT (albeit a very sporty one) are very tightly bolstered. The legroom in the rear is ample, and there’s enough headroom for six-footers.

Should I buy it?

All in all, the M8 Gran Coupe looks more playful and agile than an RS 7 and is also noticeably faster. Apart from speed, this also applies to the AMG GT 63 S. The Benz is just as insanely powerful but feels a little more uncouth and unfiltered.

In terms of driving dynamics there is hardly any loss compared to the M8 Coupe; certainly not the kind you would notice in everyday life. In this respect, the M8 Gran Coupe is certainly the better choice for those who appreciate a little variety. Especially because – for whatever reason – it’s $3,000 cheaper than the two-door.

The price premium of more than $34,000 compared to the 530-hp M850i Gran Coupe is, of course, exorbitant. But for those who don't care about the money, the full-fledged M is a car that really feels more special and performs better. 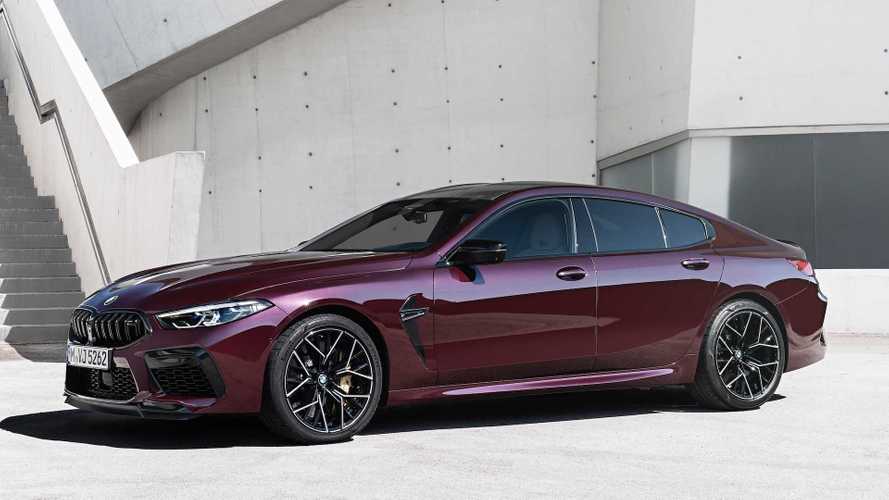 Porsche Cayman Chases Carrera GT At The 'Ring, Daughter Loves It
Ford Previews All Three Versions Of The New Bronco, Remembers Its Past
Enter To Win The First 1969 Hurst/Olds Ever Produced!
Watch How The Modern Chrysler 300 Has Evolved Over The Years
Ford Bronco GOAT Mode Is A Real Thing, Exec Confirms

Porsche Cayman Chases Carrera GT At The 'Ring, Daughter Loves It
Ford Previews All Three Versions Of The New Bronco, Remembers Its Past
Enter To Win The First 1969 Hurst/Olds Ever Produced!
Watch How The Modern Chrysler 300 Has Evolved Over The Years
Ford Bronco GOAT Mode Is A Real Thing, Exec Confirms